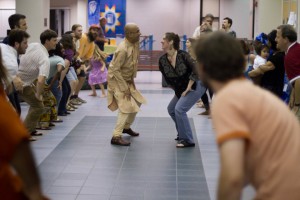 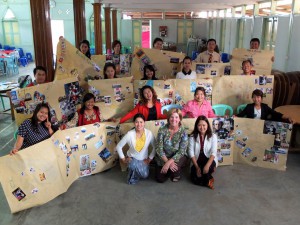 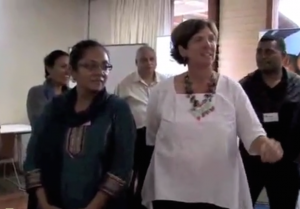 Joanne Lauterjung Kelly lives in Myanmar (also known as Burma) working with an international NGO that supports local organizations and communities to build healthy relationships and choose non-violent means of resolving conflict. She graduated from the Heart of Facilitation training in 2009, and received an MA from Eastern Mennonite University’s Center for Justice and Peacebuilding (CJP) in 2013. Joanne studied fine art in college in her 20s, and was a musician who gigged occasionally, but never thought of herself as an artist. Using the Creative Empowerment Model was an eye-opening experience and a turning point professionally.

For over 25 years Joanne worked in communications, but always felt something was missing. “I wanted a more meaningful career that was more in alignment with my values.” Joanne to take our Heart of Facilitation training (HOF). “The training set me off on a new trajectory. I started thinking about ways to integrate my previous arts experiences with my work. I realized I didn’t need to be a professional artist to lead arts-based activities. I could get great results if I understood how to use the the arts as tools for dialogue, and emphasized the process over the product.”

Shortly after attending HOF, Joanne was inspired by a friend who had been to the Summer Peacebuilding Institute at CJP. “My friend had taken a course called The Moral Imagination, based on a book by John Paul Lederach. It sounded incredible  – just the kind of thing I was looking for. So I took the course, and that experience gave me a beautiful clarity about where I wanted to head professionally. John Paul’s approach looks at ways creative expression leads to different kinds of dialogue and more meaningful relationships between people. He’s a poet, and approaches his work with an artist’s ability to observe and reflect. What I learned in that course tied in so beautifully with the practices I had learned at HOF, and helped me anchor all those arts-based activities in the theories and practices of peacebuilding.”

Having completed the course, Joanne was hungry to learn more. Three months later she went back to the CJP and took a course called Strategies for Trauma Awareness and Resiliency (STAR) which also used several arts-based processes. A month later, she enrolled in the full masters program. “I knew this was where I was meant to be and what I was meant to be doing. It felt as though all of the different experiences I’d had were preparing me for this field.”

Joanne spent four years completing the degree part-time, first traveling back and forth from Seattle to Virginia, and then later from SE Asia after relocating to Myanmar in 2011 with her husband. “I’m using the skills I learned at CJP to help people to find healthier ways of resolving conflict and developing relationships. I’ve also spent a lot of time researching the foundations of HOF’s arts activities and how they’re rooted in engaged pedagogy. There’s a lot of research that supports using arts-based learning.”

Joanne’s current work involves designing workshops to build capacity for better communication, and to help people cope with the trauma of living in a highly divided society that’s been isolated and endured civil wars for more than 60 years. “By learning about peacebuilding principles, I have a whole new vocabulary and awareness of the issues people face in highly conflicted areas. I don’t think of peacebuilding as a completely separate field – I think being sensitive to conflict is an important awareness needed in any job. The philosophy and approach I like best is accompaniment – walking alongside people to help them discover their own solutions. The best, and most lasting, solutions have to be locally driven.”

The skills that are learned through peacebuilding can be applied in a wide variety of situations and Joanne believes that anyone who works with youth could benefit greatly from understanding a few basic principles. “When working with youth the Dignity Model is something I think of as very important. The concept is an old one, but I was introduced to the idea in a book by Donna Hicks, a researcher and academic in the U.S. Professor Hicks writes that when you look deeply at the underlying causes of conflict, there’s often been what she calls ‘dignity violations’ – treating someone as if they’re undeserving of dignity.”

“We’ve all done it – put someone else down to make ourselves feel better, or give in to our ego’s needs over someone else’s. But once someone feels that their dignity has been violated it’s tempting to lash out and put someone else down, and so it becomes a downwards spiral. In my work I see this in action almost every day. I believe this is at the root of a lot of unhealthy relationships, and for youth who’ve grown up in a highly competitive or divided society, this is a common coping mechanism.”

With Joanne’s help, we contacted Donna to find out more. She has kindly agreed to let us share this PDF summary of her model to help social artists understand more about this concept.

“When I was on staff at a Power of Hope camp a few years ago, some really interesting stuff came up around anti-oppression work and what that means and looks like,” says Joanne. “In peacebuilding we often put an emphasis on relationship building and the ability to work across divisions. I think we have to ask ourselves a really tough question: are we willing to engage the oppressors? Are we willing to enter into relationship with people whose behavior we don’t agree with? When we look at oppressors and victims, it’s easy to see the victim as an individual because we often identify more with them. And we tend to look at oppressors as a nameless, faceless group. But oppressors are people. In fact, many of them are highly traumatized people. The saying in STAR is, ‘hurt people hurt people.’ Trauma that’s not transformed is transferred. The dignity model starts to strip some of that away. Can we honor another person’s dignity without condoning their behavior? It’s easy to want to isolate oppressors, but isolation has never proven to be an effective mechanism for changing mindsets. Engagement and being in relationship gives us more options to better understand the motivations of, and underlying issues with, oppressors which can then lead to creative ways to transform conflict into something healthier.”

Peacebuilding practices overlap and compliment the ideas found in our Creative Empowerment Model. “One of the skills that I’ve found useful is analysis. It’s important to thoroughly assess the context you’re in, and the culture and influences of the community you’re working with.  That way, you can develop programming that’s culturally appropriate, and not only challenges unhealthy dynamics, but offers examples of better ways of interacting. Understanding trauma and how it shows up in behavior also goes a long way in creating an inclusive experience that gives coping skills to youth living in conflict areas. Inherited trauma (being born into a highly traumatized society) often means young people aren’t aware of their own sources of resilience, which is important for them to build on to be active and contributing members of their community.”

“I would also really recommend taking a look at ‘The Charter for Compassion’. It’s written by British theologian Karen Armstrong and Archbishop Desmond Tutu. The charter is an effort to restore compassionate action to the center of people’s religious, moral and political lives. It’s not just for individuals – the City of Seattle has signed it, and so have schools, businesses, scientists. It’s such a refreshing framework in this highly competitive world, and could provide some useful approaches to anyone working with youth in how to frame the value of compassion.”

Find out more about Joanne’s work in this short video of a workshop she led, sponsored by the UN Development Programme. This was a training of trainers in 2011 to give them arts-based tools to use when working with civil society groups on their submissions to a new constitution.