Rebekka’s Story: The Magic of Music 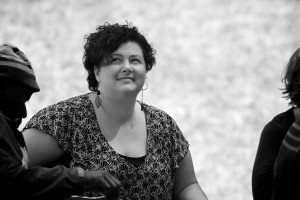 Rebekka Goldsmith has been part of our community for many years and her work with music and particularly vocal improvisation have helped to shape the way that we use music in the Creative Community Model. Here, she tells us how she discovered the incredible transformational power of the voice and why she finds music to be such an incredible tool for inspiring positive change.

My road into this field of work was quite circuitous. I spent a while working with affordable housing and I had to organize meetings with people in which we would discuss really difficult things, like the need for them to move out of their home. While I was doing that I realized that when I took the time to create meetings and programs for people that really valued their input, ideas and experiences, the relationships between everyone became a lot more humane and connected. That was the first time that I really got thinking about what people’s needs were and how to create spaces where people can get those needs met.

I started to react strongly against the bureaucratic way of working and I started facilitating the meetings to give people ownership of their situation rather than just telling them what was going to happen. It was an interesting situation because even though there was a clear power dynamic in place we could really shift that by seeing each other as people.

During that time I was also supervising a team of staff. At first I found that idea quite intimidating because I thought that leadership was about being in charge and having all the answers but the people I worked with showed me that that wasn’t always true. I became intrigued by leaders I saw who shared power and space with others. I noticed that people were naturally drawn to these types of leaders and that in general, that approach was much more successful.

At that time I hadn’t been doing anything with music for many years but as I started to develop a real interest in meaningful community building, I naturally started to look to music as a tool. I happened into a weekend vocal improvisation workshop led by the awe inspiring Rhiannon, and realized that the practice of creating music in the moment was a fantastic practice for building exceptional music skills and developing a deep sense of self and community. That led me to the Power of Hope. As with most people, I came to it through word of mouth. I had been talking to a few people about the areas of work I had been exploring and developing an interest in and within about a 3 month period, 4 separate people told me that I should look into the Power of Hope.

In researching the organization, I discovered the training program Heart of Facilitation (HOF) and made the decision to really commit to developing my skills as a facilitator.  I felt like I had developed facilitation skills along the way but that I had definite holes in my knowledge. HOF allowed me to connect the pieces and to think about deliberate and conscious design where you are really looking at the big picture and understanding how all of the pieces fit together.

HOF allowed me to really think about facilitation and how to bring music, particularly vocal improvisation, into that. It was as though all the things I was doing started to come together and intersect and I remember having this really strong feeling that I was in the right place.

My major had been in theater and after University I went on to a conservatory for theater but I was never drawn to the performance side of things. I was drawn to theater’s amazing ability to allow people to experience themselves more fully and to relate to the world they were living in.

I still use theater games and exercises now, but most of my work is with music in all its many forms, in which ever way is most helpful to inspire healing, communication and deeper understanding of yourself and others. These days I am lucky enough to work with an incredible range of people from age 3 to 105. I have had the opportunity to share music with so many people. It’s been really fantastic. For me, music transcends age and other barriers and structures to get to a real common space of engagement.

At one particular Power of Hope camp I met a young girl who was very shy and quiet. She came along to a workshop that I was offering on vocal improv and she seemed to enjoy it. Afterwards she wanted to stay behind and talk to me and she said that she had a desire to use her voice more. Over the next few days we spent a lot of time sitting together and doing simple vocal improv exercises and games. Slowly, I could see that something was opening up in her. When it came to Heart Circle she got up and she performed a vocal improv. There were no words, just a pure, raw expression of what she felt. It was very moving.

At another camp I met a girl who was also very shy but who was very keen to challenge herself. Before the open mic she asked me if I could perform with her. I agreed but during the practices I would go quite quiet and allow her voice to shine. When open mic came around I stood up with her but I turned to her and asked her if she was ready to do it alone. She agreed but she asked that I stand near her. I actually still have tears in my eyes when I think about that moment now. It was through music and using her voice that she was really able to get to a place where she felt able to accept people cheering for her and to feel really safe and seen. It was a transformation moment and I will never get tired of seeing that kind of change in someone.

That is the power of music to help someone to really see what is inside them. The tools within the Creative Community Model really allow me to help and support someone through that journey using music.