Arts and Creativity Inspire Youth at UNIS school in Hanoi

The arts festival was part of the Mekong Regional International Schools Association. The organization brings together 8 schools from Vietnam, Laos, Thailand and Cambodia. Throughout the year these schools compete in sports tournaments and once a year one of the schools hosts an Arts and Culture festival. This year UNIS was hosting and I was lucky enough to be part of it.

Being a part of the festival felt very much like being part of the Power of Hope summer camps. It had the same kind of energy and excitement and I saw again how the power of creative expression can so quickly create bonds among young people. 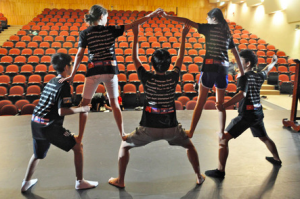 The 160 students began each day together with vocal warm ups and choir practice and then took workshops all day in classes such as visual art, drama, dance, and music. There were some amazing workshops on arts and creativity that were being offered around the theme of Creatures and Consumption. The young people created art pieces using traditional Vietnamese lacquer and there were classes on silk painting, lantern making and art using recycled baskets. They created Monster videos and a joint abstract creature sculpture that grew on the front lawn over the three days.

One of my favorite happenings was a performance of the Ramayana on the first night. Each school had been given a part of the story prior to coming to the festival. They had to create their interpretation of their piece in an 8-minute performance. On the first night all the schools performed their pieces to tell the story. Schools used multi media, humor, traditional dance, hip-hop and abstract theatre. It was an exciting display! 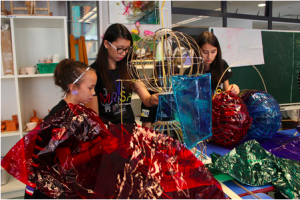 All of the young people also participated in a creative workshop of either world drumming, dance, physical theatre, or Stomp (creating rhythm using everyday objects and your own body). Each group of 10-12 students created and practiced one piece of their chosen creative workshop and each workshop put all four together to create a final piece for the last night performance.

The whole festival was created and organized by my good friend Liz Druitt who is the head of arts for UNIS. She did a spectacular job and I feel so lucky to have been a part of it.

Donna Bracewell founded and directed Linnaea School, an arts and nature-based school on Cortes Island in British Columbia, Canada. Power of Hope has run summer camps at the school for nearly 20 years. Donna now teaches at the UNIS school in Hanoi, Vietnam. 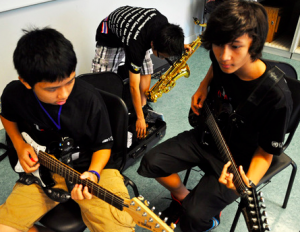