An Introvert’s Advice on Working with Youth

Ever since Susan Cain gave one of the most successful TED talks of all time on the subject of ‘The Power of Introverts’ in February 2012, the idea of catering to a portion of the population that identify as ‘quiet’ has been gaining traction. To find out more about the ways that introversion manifests in a camp environment we spoke with Ruby Smith Diaz, facilitator, social justice advocate, and self-identified introvert.

“The introversion/ extroversion dynamic is a complicated one,” says Ruby. “I think we need to be cautious about using a generalized theory when we work with youth, especially when we’re talking about folks from diverse backgrounds. What seems like introversion at first could just be someone checking the situation to see if they feel safe and asking themselves ‘is there someone I can relate to? Is my voice going to be welcome here? Am I going to get shut down?’”

“In some cases it might be their first time away from home or living without their family or community.” Ruby has been a Lead Facilitator at our partner program Power of Hope camps on Cortes Island, Klahoose Territories, Canada for the past two summers. “In that context a lot of folks who attend are coming from Indigenous communities in the lower mainland. Often their interactions with white folks or folks from different cultures may have been quite negatively shaped by historic intergenerational trauma, or present day racism.” For Ruby, when you take that background into consideration, quietness isn’t always a signifier of innate introversion, but rather a natural reaction to being in an unfamiliar environment. 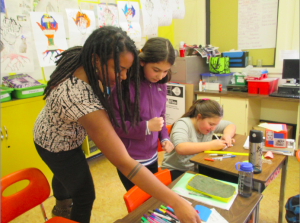 “I’ve had lots of experiences with youth where someone may appear to be an introvert because they are a little shy,” but Ruby points out that assigning someone to the introvert category too quickly may mean that you miss opportunities for growth. Most Creative Empowerment camps have an open mic night towards the end of the week. It’s a chance for youth to perform in a supportive, open environment where there is no pressure to present a perfect work. “There are often youths who are on the line about whether or not they should do a performance or share a song. They may just be feeling unsure and nervous and they may just need a little push. I don’t think that it’s necessarily the case that we are always introverts or always extroverts. I think it can change depending on the level of safety, on who we are being seen by and if we are feeling safe or not. That’s where, as facilitators, we need to be very aware.”

As well as being a facilitator, Ruby is also a performer. “I think people are generally surprised to see someone who is often quiet take center stage, but I’ve seen a lot of performers have ‘introverted’ moments. We are sharing something that is in many cases a part of our core, a part of our identity. We are putting something out there, we are expressing the deepest, most hidden part of ourselves, so anyone is going to be a little nervous or shy in that situation, even the most extroverted of folks.”

I ask Ruby whether she thinks that introversion can have advantages for facilitators. “Sure,” she says brightly. “I find myself being really hyper aware of things. During my day to day life I often have to tone that down as it can be a little overwhelming, but as a facilitator I think it’s a skill, because I can see and hear things that other folks might miss because of their natural disposition.”

“I think sometimes when I’m quieter in a group it helps folks to share with me in different ways than they might do with the more extroverted facilitators because perhaps they can identify with me.” Having been a mentor at a camp that Ruby was leading last summer, I agree that for many of the youth, Ruby’s quieter presence is welcome. “A lot of times the more introverted folks will connect with me and talk to me about their experiences. I’ve had a few people say ‘I didn’t know that I could be a facilitator if I was quiet’.”

“We need the introverts in the group, but we also need the extroverts. Extroverted facilitators play a big role in terms of getting people hyped up, especially in terms of the first couple of gatherings where it is often necessary for the facilitators to put themselves on the line and share more of themselves in order to help others do the same. At the same time, it has to be measured. We need the hype, we need the extroversion and the big sharing, but we also need to be paying attention to the feeling in the room and to making sure that we’re not pushing people past their comfort zones too far or too fast.” 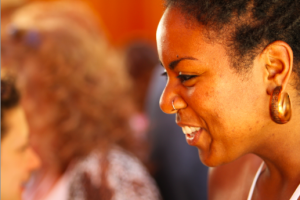 I ask Ruby if she has any tips for accommodating different levels of participation in a group. “One way is to practice good listening,” she says. “When I say listening I mean listening with your ears, listening to what is not being said or to what is not being talked about, and also listening with your body. Our bodies are good indicators of feelings in ways that as a result of colonization, we aren’t taught to acknowledge. You might have at the pit of our stomach or you might feel your heart racing. There are lots of occasions where we feel that something is not right but we often push that feeling aside because we think we shouldn’t feel that way. Ask yourself ‘is there something in this room that I need to be more aware of? Is there something that I need to say or vocalize here?’ As facilitators we really have to hone in on that because our gut reactions will often tell us so much.

“Often I will sit in a facilitated conversation and I won’t say anything for the first few hours because I’m just listening and checking in with myself. If you’re someone who usually likes to talk right away or who generally speaks up, I would invite you to try attending a workshop and for the first half, just watch and listen and pay attention to what your body is telling you.”

Ruby has a second tip. “You need to think about your own experiences and flesh out your own identity. Ask yourself how you are being read. What gender am I being read as? What about ethnicity, background? It’s important that we understand this because it helps us to understand what people are seeing when they are looking at us and how that creates different dynamics, dynamics which allow some people to connect easily with you while some people will find it more difficult.

“If there’s a certain group that I’m not connecting very well with then it’s important to think about why that is happening. What is that from? As facilitators we should be looking around the room to see what kind of role models there are in terms of the demographics. Are different demographics being represented? Is that influencing the ways that people are showing up in the space? If those different demographics aren’t there then why isn’t that happening?”

Ruby is making the important point that when people are quiet in workshops, there may be several root causes and facilitators need to be very cautious of pushing people into paradigms that are as simplistic as the introvert/ extrovert dynamic. This is particularly true of Creative Empowerment camps, where Ruby points out that “generally speaking we tend to try to move people from being quieter, safer versions of themselves to, by the end of the week, being louder and more magnified versions of themselves.” But for Ruby, its essential that we don’t prize extroverted behavior as the ultimate goal. “I think we really need to take it upon ourselves to make sure that the youths who are there in our workshops and in our programs feel that they can be the best they can be no matter what that may look like on the outside.”